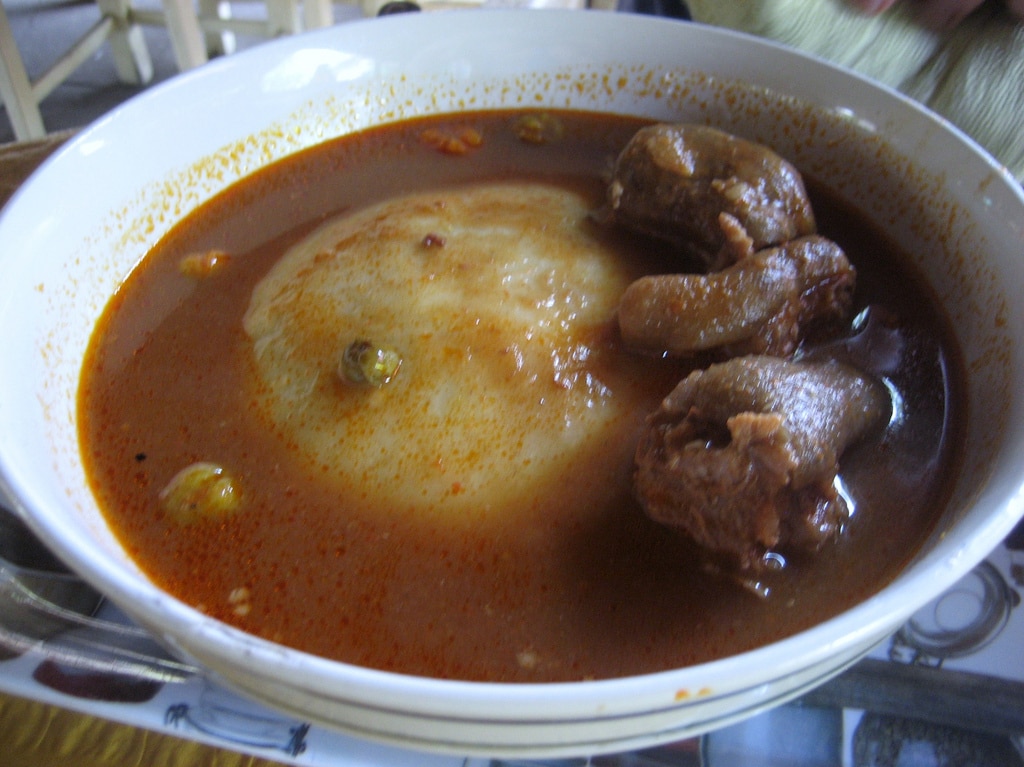 The culture of Ghana is based on its cooking and particularly the traditional foods. The dishes originated from different tribes, and regions of the countries, while others are from the neighboring nations. Normally, the traditional meals are prepared using the Ghanaian staple foods such as Cassava, yams, Corn, Plantain, which are served with vegetable-based soups or stews. Fish, meat, rice, ginger, garlic, tomatoes, and hot peppers are also served alongside the traditional foods.

Red-red is a satisfying traditional meal that incorporates cowpea beans. It is served with palm oil and soft, fried plantains. A red-red dish does not require many spices because its primary taste comes from the ingredients. It is an ideal meal for people who do not like animal products.

Fufu is a traditional food that is prepared by mashing boiled cassava using a mortar and pestle. Mashing translates the Cassavas into a dough substance that can be molded into balls. The Portuguese introduced Cassava during the 16th Century, and since then, it’s been a significant ingredient for various Ghanaian meals. Fufu is commonly served with a soup such as a palm nut soup, light soup, and groundnut soup.

Banku dish is made from fermented corn and cassava dough. It is a sour mash that is generally served with ground pepper and grilled fish. Banku is among the favorite meals to most tribes in Ghana, although Ga and the Ewes tribes introduced it.

Konkonte is a traditional food that became prevalent during the 1980s famine. The dish was also called “face the wall,” which means that people were ashamed of taking the meal. It was made using different types of Cassava that were obtainable during this famine. The cassavas were mashed before preparing the meal hence its brownish color. Konkonte was initially linked to lower-class citizens residing in Northern Ghana. Today, Konkonte is served with groundnut, palm nut, and Okra soup, and it’s popular among many people in Ghana.

Waakye is a famous traditional meal prepared for breakfast and lunch in Ghana. The dish shows Ghanaians’ creative use of Rice. It is a reddish-brown meal made by mixing rice, beans, and Sorghum leaves. Waakye is served with grated cassava, spaghetti, salad, meat, or fish. Waakye was initially common in Northern Ghana, but currently, it is common in various streets of Accra.

Akan region residents initially made yam and Kontomire meals because yams are common in this place. Poached yams are usually served with Kontomire, and it’s a famous meal among the people of Ghana. The Kontomire stew is also known as “palaver sauce.” A local sauce is prepared with cocoyam leaves and palm oil.

Jollof Rice is linked to Senegalese Cuisine; it is a famous one-pot rice dish with tomatoes. The dish originated from the cultural exchange between West African Countries. Jollof Rice is among the most recognized traditional Ghanaian meals.

Kelewele is a fried plantain made with various spices. The key spices used in preparing this meal include ginger and Cayenne pepper. It is a popular meal among the people of West Africa because Plantains are very esteemed. Kelewele is served with either groundnuts or peanuts. Most people enjoy this meal because Plantain is a wonderful appetizer.

Kenkey is a favorite Ghanaian meal prepared with fermented white corn, enfolded tamal-like in either corn pods or Plantain leaves. The Ga people in Accra initially made Kenkey. Kenkey is mainly served with fried fish and pepper sauce.

Tuo Zaafi is prepared by cooking corn dough and adding some Cassavas. It is just like Banku, although it is somehow soft and less sticky. It is a unique traditional dish of the rare herbs such as dawadawa and ayoyo leaves used in preparing the soup.