Home News A journalist repeatedly slapped by a police officer for asking him why he was not wearing a face mask.
News

A journalist repeatedly slapped by a police officer for asking him why he was not wearing a face mask. 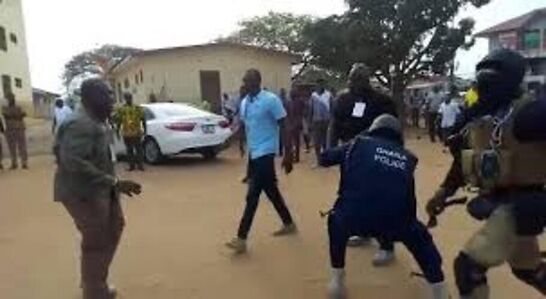 A journalist who works within the central region was repeatedly slapped by a policeman. This was after the journalist enquired why the police officer was not in a face mask. Corporal Sey, together with his colleagues were on a patrol enforcing Covid-19 protocols.

Speaking during an interview, the journalist said that he questioned the police officer to get him lead as an example by wearing a face mask. He further, revealed that he lost his wedding ring after being slapped three time by the officer.

A big crowd went to scene and separated the two, but despite that Corporal Sey followed him and stormed the front desk of his office and continued beating him. The matter is being investigated by the Mankessim Police.

Dr. Mahamudu Bawamia says that the government will support the processing of Cocoa.