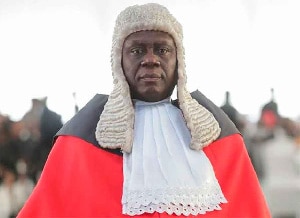 Ghana’s Chief Justice Kwasi Anin-Yeboah and Lawyer Akoto Ampaw have been adversely mentioned in a bribery case of $5 million. In a statement by Kwasi Afrifa of O&A Legal consult, the legal firm stated that it’s client Ogyeedom Obranu Kwesi Atta VI told him that the Chief Justice has asked for a bribe of $5 million for his case to be successful.

In a Statement by Kwesi Afrifa noted that in the case which was between Agyeedom vs Ghana Telecommunications Agyeedom was asked to pay in order to have the case decided in his favour. Agyeedom noted that he had given his lawyer Afrifa $100,000 only to realize that the money was not used for the rightful purpose and therefore fired him. According to him: “I fired him from the case and asked him to refund the money but he has since refunded $25,000 leaving him with a balance of $75,000. All efforts to get the remaining amount have failed.