Everything You Need To Know About The Hogbetsotso Festival 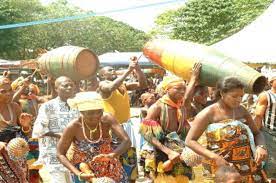 Festivals are significant functions held by various ethnic groups in Ghana. Hogbetsotso Festival celebrations start in the month of November at Anloga, the traditional and ritual place of the Anlo state. The Anlo community in the Volta Region of Ghana is well known for establishing festivals and celebrating each year. This festival describes the Ewe history, the memories of the legendary movement, and heroic acts of boldness by men and their mystical powers that saved the people of Ewe-Dogbo from tyrant King of Kings Torgbui Agorkorli of Nortsie in Togo.

Hogbetsotso means the day the people decided to move out of Notsie. The people Anlos are alleged to have migrated from southern Sudan to Notsie and then to their current home on the eastern coast of Ghana in the 15th century. King Agorkorli mistreated the people of Ewe, and therefore they had to leave this place. An old lady soothsayer informed them that they had a plan to kill them, and therefore they had to find out how they were going to move away from the town. The town was surrounded by a wall coated with human blood for spiritual reasons, and therefore it was challenging to escape. They came up with a plan to pour water on one side of the wall anytime they wanted to dispose of dirty water. The wall became weak; hence it was easily breakable, and the Ewe people successfully left the town.

Hogbetsotso Festival is associated with various ceremonies, for instance, the peace-making period whereby all the existing problems are fixed. It is a cleansing ceremony of the traditional stool and a time for general cleaning, including sweeping and burning dirt in all the villages. The purification ceremony starts at the Volta inlet and continues for days until they arrive at the Mono River in the Republic of Benin.

The third day is the dodede and nugbidodo celebration days. The dodede rite means disease removal, which involves eradicating sicknesses and expelling evil spirits associated with diseases. Dodede is a good way for people to link with the supreme God, gods, and their ancestors, and it is an entirely private rite. Nugbidodo means resolution, and therefore the Anlo people make peace among themselves. They believe the ancestors do not like disagreements and misunderstandings because this can result in illness and hinder development. Nugbidodo is conducted among family members, clans, lineages, and traditional rulers. It is generally believed that the Hogbetsotso festival will be unsuccessful until this rite is accurately executed.

This ceremony’s durbar of chiefs and the people is a significant feature. Chiefs dress in beautiful ceremonial clothes and sit in state to receive tribute from their subjects. The most critical durbar is normally held on the first Saturday of November in Angloga, the traditional home of the Anlo-speaking Ewes in the Volta region. Singing, dancing, and merry-making go on during the festival.

The Durbar is an essential part of the Hogbetsotso Festival, which is held to remember the migration of the Anlo-Ewes from the walled city of Notsie in Northern Togo to their current place of settlement. The Hogbetsotso Festival is terminated with dancing and drumming to ‘Husago’ by walking backward, which is alleged to confuse their enemies who might follow them after they have moved away from the evil king Agorkoli. The dance is mainly done by young ladies, specifically the young ones; it is a fabulous scene that is worth witnessing.

The festival attracts many people from around Ghana, such as elders and chiefs of Anlo-land, to commemorate the annual event in the Volta Region. Besides, Hogbetsotso Festival also attracts visitors from other parts of the world.

Why Ghana is a popular tourist destination in December