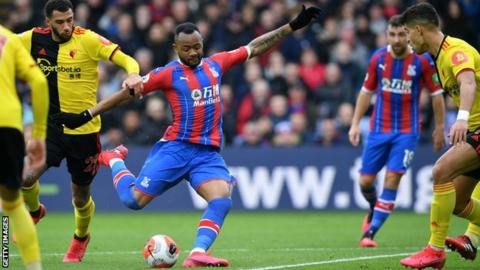 Jordan Ayew once again proved to be the main target man for Crystal palace after helping them secure a vital win. Ayew scored in the 28th minutes in their game against Watford helping them climb to 10th. Palace is now four points behind the 5th placed team Wolves.

In his post-match interview, Hodson noted that:

“I’m delighted. We showed incredible character to dig in and defend valiantly. We have every faith that this team won’t get dragged in [to a relegation fight] and will maybe even start looking to push further up the table and get in behind one or two teams above us. I would be very surprised if that was to happen but I don’t rule anything out because in football you’re foolish to rule anything out.”

The Saturday fixtures were started by an early kickoff between premier league winners Liverpool against relegation-threatened side Bournemouth. Liverpool returned to winning ways after beating Bournemouth 2-1. Bournemouth opened the scoring with a fine finish from Cullum Wilson. Liverpool responded swiftly with goals from Salah in the 25th minute and Sadio Mane in the 33rd minute. The win has taken Liverpool to 82 points.

On Sunday Chelsea thrushed Everton 4-0. Chelsea goals were scored by Mason Mount, Pedro, Willian and Olivier Giroud. Chelsea had an impressive display despite having a massive list of injuries. The blues were without five of their star players including Kante, Pulisic, Odoi, Kovacic and Abraham.

The last game was a Manchester Derby. Manchester City had massive possession but Manchester United went on to win a comfortable 2-0. Their goals were scored by Martial and McTominay. The win means that liverpool have only two games to win the league.

Best Places to visit in Ghana this year