Ronaldinho getting love in Paraguay prison 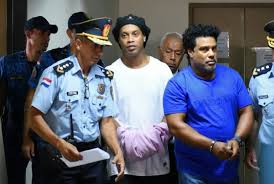 Ronaldinho seems to have won the hearts of thousands of inmates in the Paraguayan prison where is currently held. The former Brazilian star has been in prison for weeks after he was found using fake travel documents to enter Paraguay with his brother. At the moment it’s not known how long he will remain in prison but reports state that if found guilty he could remain in prison for up to 6 months.

In a recent tournament in the prison, Ronaldinho participated helping his team win the tournament. He also received an award for the best player. He has mixed well with the inmates and he is currently teaching then football.

According to reports from the prison:

“He (Ronaldinho) plays football every day and teaches the guys he plays with a few tricks. From the very first moment he wanted to make sure he integrated with the other inmates and he quickly managed to do that. He’s an idol for many of them and they have asked for him to sign hats, shirts, and trainers.”

Nelson Cuevas who is also a retired star visited Ronaldinho and stated that he was not acting like himself. He said that the star was sad and hoped that he could get out soon. He, however, said that his lawyers were handling the matter well.

Ronaldinho is said to be very angry and has even vowed never to return to Paraguay again if released from prison. The only thing keeping the star busy at the prison is football. He has been very busy signing autographs of inmates. Many inmates were very happy to come close to him saying that he was their idol. His case is expected to be concluded soon. He will either be sentenced, deported or asked to pay a fine for the use of fake documents to enter the country.