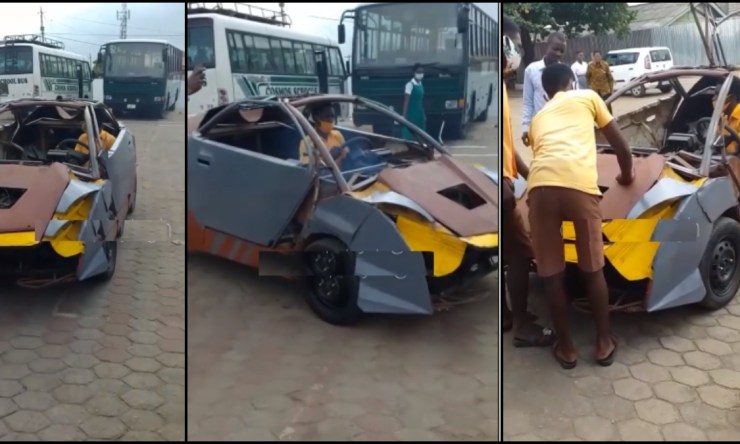 Kelvin Odartey, a teenage inventor who built the car from recycled metallic waste has revealed that his first invention was an aircraft before building his first moving car which has gained the nation’s attention.

He was one of the many candidates writing the just-ended Basic Education Certificate Examination (BECE) nationwide disclosed that he was motivated to start his invention after seeing an airplane fly in the sky.

Kelvin Odartey said he had to put his aircraft ambition on hold and face reality because the plane could not fly for some reason.

“I got the idea from an airplane. The plane was passing and something told me that I can do it and I started doing something,” he said.

Kelvin added, “I started building a small airplane, but how I wanted it to get to the level that I want, I didn’t get it like that.”

Kelvin explains that because of financial constraints, he started to build his moving car. He knew that his idea to invent the car was to grab the attention and motivation from the public to support him.

“It reached a time, I decided to build a moving car so that everybody can help,” he said.

“When I was doing it, we were going to exhibitions in schools and as time went on we were winning awards but we didn’t get the support that I needed so I decided to build something big like this so that even if someone sees it, it will motivate the person to help me,” Odartey insisted.

He had a difficult childhood with his mother and siblings after the death of his father Kelvin stated that he faced so many hardships inventing his car because he had no source of income or funding. He disclosed that he was compelled to sell metallic scraps to earn some money and to purchase materials he required to build his car.

Modern Technology Should be introduced in Ghana’s Football,...