All You Need To Know About Kwame Nkrumah Memorial Park 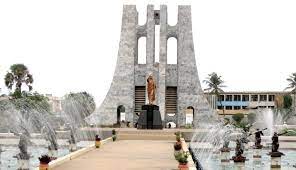 Ghana was the first sub-Saharan African country to gain its independence in 1957 led by Dr The Kwame Nkrumah Memorial Park is a historical park constructed to honour Ghana’s first president.

The Kwame Nkrumah Memorial Park and Mausoleum are situated in Ghana’s capital city. Both the Museum and tomb were carefully designed in harmony to honour the late Kwame Nkrumah. The Museum is underground and, together with the tomb attract so many visitors from Ghana and outside Ghana. The Kwame Nkrumah tomb is commonly known as the genesis by most researchers of real Ghanaian history.

The entry to the memorial park and mausoleum is from the High Street along the Coast of Independence Square. It is situated opposite the Old Parliament House, currently known as the Human Rights and Administrative Justice Commission.

Also read: Why you should Visit Mountain Afadjato in Ghana

The Kwame Nkrumah memorial park covers a total area of roughly 5.3 acres. The Park has two significant structures, the mausoleum and a museum. The tomb features Kwame Nkrumah’s bronze statue. The statue stands where the late Kwame Nkrumah stood to announce Ghana’s independence from the British colonies in 1957.

The Tomb is the last resting place for Kwame Nkrumah, the first Ghanaian president after the country gained its independence. The remains of Dr. Kwame Nkrumah and his spouse Fathia Nkrumah lay the Mausoleum; it was designed by Don Arthur. The body of Dr. Kwame was first buried in Guinea, then it was transferred to Nkroful and later to this Mausoleum.

The design of this tomb is intended to signify an overturned sword which according to the Akan Culture is a sign of peace. The sword also symbolizes the incomplete works of Nkrumah to totally unite Africa.

The Tomb is fully dressed with an Italian glass ball, with a black star at its tip to signify unity. The inner side of the Mausoleum has marble flooring and a small mastaba looking marble grave pointer bounded by river-washed rocks.

There is a window at the tip of the Mausoleum that brightens the grave, and at the right time, it seems to reflect off the marble more, highlighting the beauty that most people seem to adore. Kwame Nkrumah’s tomb is encircled by water, which signifies life. The water symbolizes immortality for the late Kwame Nkrumah, indicating that he still lives in the hearts and minds of so many people in Ghana and other generations yet to be born.

The fascinating memorial park is very attractive and it has an ultramodern construction. The Park features two water springs on both sides of the pathway. Besides, it has seven unembellished chests, squatting sculpture flute blowers, and blowing springs out which welcomes international leaders and other significant people whenever they visit this place.

According to the culture of Ghanaian people during special ceremonies, flutes are blown to invite very important people. Although everybody in Ghana is considered important, all tourists visiting this park are regarded as very important persons and they usually receive a warm welcome.

The Museum has several erratic artefacts linking to Ghana’s independence and visiting this park grants tourists a chance of getting a detailed history of Ghana’s struggle for independence. The Museums houses the private possessions of Nkrumah, such as the books that he wrote, picture archives and sanctioned photos that indicate the history of his life.

The key pictures feature Nkrumah with other prominent leaders such as Queen Elizabeth II of England, president John Kennedy, Pope Pius XII of the United States. Other photos show some of the 20th century Ghanaian leaders with Dr. Kwame. The metal coffin given by the Guinea citizens after the remains of Dr. Kwame were taken from Guinea to Nkroful is still at the Museum.

The Kwame Nkrumah memorial park is an important tourist’s attraction site in Accra that you can’t afford to miss while in Ghana. The evolution from Gold Coast to Ghana was conducted in this park.

Reasons why you should visit the Ankasa Conservation Reserve