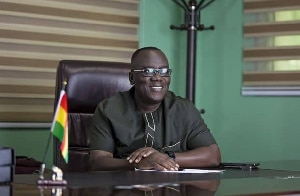 Kwadwo Owusu Afriyie popularly known as Sir John is dead. He was the current forestry commission boss and the former Secretary-General of the ruling party NPP. Kwadwo is said to have died in Accra after a short illness. Reports from Korle Bu Teaching Hospital indicate that he died of complications related to coronavirus.

His death has been mourned by many people in the country who termed him as a true patriot. Dr. Mahamudu Bawumia sends out his condolences to the family of Kwadwo. He noted that he had spoken to him on the 30th of June and was doing well.

According to the vice president: “I have learnt with sadness the passing of Lawyer Kwadwo Owusu-Afriyie aka Sir John, former General Secretary of the New Patriotic Party and Chief Executive Officer of the Forestry Commission. I spoke with Sir John only yesterday but little did I know that was our last conversation. Sir John was a good man who truly paid his dues to the Party and Ghana. I will miss him.”

Akufo-Addo on the other hand termed the death of Kwadwo as a great shock. He termed him as a great worker with a massive character. He added that he was full of energy and humor. According to Akufo-Addo: “These were the multi-faceted aspects of the career and character of ‘Sir John’, which earned him considerable renown both as erstwhile General Secretary of the NPP and CEO of the Forestry Commission.”

“My wife Rebecca and I extend our deepest condolences to his entire family. Sakora Wonoo has lost a valiant son. He will be widely missed”, adding: “May the Good Lord bless him, and give him a peaceful place of abode in His Bosom until the Last Day of the Resurrection when we shall all meet again”.

“Sir John, we will never forget you!!”