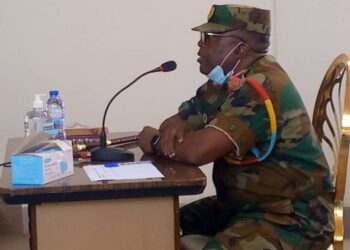 The Ghana Armed Forces’ disciplinary board has taken punitive measures against errant military officers who were directly or indirectly involved in the July 1st Wa military brutality whereby members of the public were physically assaulted. This is according to the Minister of Defence, Dominic Nitiwul, who appeared before Parliament on July 8 to answer questions regarding the Wa military brutality.

While speaking on the actions taken against the errant military officers, Nitiwul disclosed that the punitive measures included immediate demotion for three officers, eight officers to serve jail terms, and the other officers whose involvement at the Wa military brutality was at a lesser extent will be transferred. Further breaking down the details, the Minister unveiled that the officer on duty, a Lieutenant, will soon be facing a trial.

“The trial of the duty officer, who is a Lieutenant, will, however, commence on or before Wednesday 14th July 2021,” said the Minister.

In matters of demotions, Nitiwul revealed that a Staff Sergeant was demoted to a Corporal rank, a Corporal to Private rank, and the Sentry on duty, a Lance Corporal was demoted to a Private. “All the above trials and punishments are without prejudice to the outcome of the subjects under various forms of investigation,” said the Minister before adding, “The remaining soldiers who were also involved in the incident but not identified as brutalizing officers will all be transferred out of the region immediately.”

This comes after military officers were captured in a viral video physically assaulting members of the public following the stealing of a phone belonging to one of them (military officers).