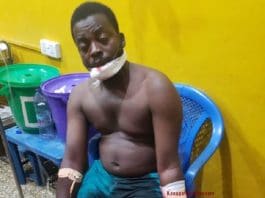 Murtala Abdul Karim who is in his thirties, had his left hand cut off from the wrist after he was slashed with a sharp machete by some quarreling youth in the Aboabo Akorem community in the Asokore Mampong Municipality of the Ashanti Region.

Murtala Abdul Karim who is an electrician, suffered the fate when he tried to stop the young men from accomplishing an attack on their rival whom they said had ceased their horsewhips.

This man lost 2 teeth and was not able to communicate from his hospital bed at the B2 block of the Komfo Anokye Teaching Hospital where he was enduring the agony after undergoing surgery.

Abdul Rahman who was the actual target of this attack, his head is currently wrapped in bandages and he almost died after he was hit in the head by this young man with Machetes.

While speaking to Ultimate FM’s Ivan Heathcote – Fumador, “I heard screams outside my door. When I came out, an electrician who had tried to stop them from attacking me had been attacked. His hand was cut off,”

“I tried chasing them but I slipped. They slashed my head with a knife and kept shouting ‘we got him we got him’ and fled,” Abdul stated.

Umar Morison, a fellow electrician who saw the bloody attack is worried that his colleague will not be able to work anymore and has demanded justice.

Umar Morison stated, “I separated them when they began to fight. After an hour the younger man returned with some boys. When we came out the hand of my friend the electrician had been cut off,”

“We want everything to be done to seek justice for him. Because he has lost his hand and cannot work again,” Umar Insisted.

A mother of the main suspect behind the attack who is currently on the run has been arrested by the airport police.

Mukarama Ahmed, the Sister to the man whose hand was cut off is afraid that her family youth may be incensed to revenge if the culprits are not brought to book.

“We could have taken this case into our own hands but so far as the law exists, what we need is justice. We have realized they want to make it a foolish case. But the government has to intervene to ensure that their mother remains in custody until the culprits are arrested and made to pay for what they did,” an angry Mucarama demanded.

The cry in the Akurem Community is loud from now. This community either see justice or take any action they deem fit to avenge their brother.