Thief cuts his own throat to avoid arrest 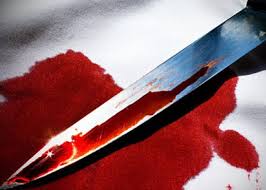 A suspected thief who is said to be terrorizing motorcycle owners cut his own throat using a knife to avoid arrest. Police offers are said to have raided his home in Uasin Gishu County in Kenya when he opted to take his own life instead of going to the police cells.

According to Kenya’s Director of Criminal Investigation George Kinoti: “Three robberies with violence suspects who have been terrorizing Kapseret bodaboda operators in Uasin Gishu county were last night arrested and three motorcycles recovered at Soy Likuyani following a swift pursuit on them after they attacked and robbed a victim, leaving him unconscious.

“On gaining consciousness, the victim, whose motorcycle was robbed after the gang of four armed with machetes attacked him at Berur area, alerted the police who jointly with members of the public pursued the suspects with the aid of a tracker fixed on the bike.

“After interrogating the suspects, officers proceeded to the home of the fourth suspect at Sauti ya Engine estate, but who on sighting the police and to avoid arrest took his life by cutting open his throat with a kitchen knife. The three suspects are in custody being processed for arraignment.”