Man arraigned for threatening to kill neighbor for snatching his girlfriend 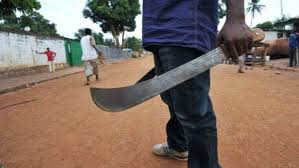 A 30-year-old man who threatened to kill his neighbor for snatching his girlfriend has been granted a GHc 10,000 with 2 sureties by a court in Cape Coast. The complainant who was identified as Smith George explained to the court that the accused, Kobina Aggrey threatened to cut him into pieces. George who refuted the claims of snatching the girlfriend said that he went to Aggrey’s house to sort out the issues but Aggrey became violent and threatened to kill him.

The matter is said to have been brought into control by an eye witness. Feeling threatened, George went to report the matter to the police.