Home Entertainment Serwaa Amihere has said that she prefers being single to being in an unhappy marriage.
Entertainment

Serwaa Amihere has said that she prefers being single to being in an unhappy marriage. 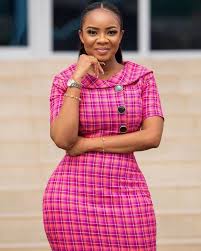 According to Serwaa Amihere, marriage is not the most significant stage in life. The Tv presenter was criticized by some individuals for holding a lovely party on her 31st birthday on 8th March 2021. While responding to some critics she said that being single at 31 is not a big issue. The Ghanaian Broadcaster said that there are more significant things in life that deserve more attention than marriage.

Besides, she said that it is okay to be single than rushing to an unhappy union. “Everybody goes and marry! As though it’s the most important thing in life. You’ll be pushing women to end up in unhappy and abusive marriages.” Serwaa Amihere wrote.

Daniel Obinim has revealed that he usually steals from the world Bank Spiritually.