The disadvantages associated with Tourism in Ghana 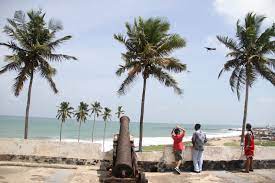 Tourism is a significant source of income for Ghana. Just like any other industry, tourism gas its advantages and disadvantages. Despite being an important sector, Tourism has a few drawbacks that may result in long-term damage to society if not addressed well.

Tourist attractions attract a large number of tourists, both local and foreign tourism. Foreign tourists travel from different continents going for a holiday in Ghana. Some tourist attractions receive a large number of tourists, and therefore the chances of environmental pollution in these regions are normally higher. The environmental pollution does not result from the tourists themselves but a large number of cars and airplanes flying from one destination site to another during their vacation. The frequent movements result in carbon monoxide emission within those areas, which negatively affects the surrounding.

Ghana has various ancient structures that receive a large number of tourists each year. The tourists are interested in learning the amazing Ghanaian history, especially the slave trade history. Due to the frequent visit, these sites are slowly wearing out.

The tourists coming to Ghana have their own cultures and lifestyles that they usually practice during their vacations. Most Ghanaians try to emulate their cultures, for instance, their dressing code. Imitating the foreign lifestyles may result in the exploitation of the Ghanaian culture; instead of relating to and respecting their culture, most people have adopted western cultures.
The exploitation of the ancient culture is a great challenge to the Ghanaian sector, especially in these modern days. This is a danger to the future because cultural tourism may not attract any foreigners, hence low income to the country.

Emulating unacceptable Behaviours from the Tourists

Although most tourists adore the culture of Ghana, there is a small number of tourists who don’t respect the local Ghanaian traditions and policies. The tourists may end up violating the accepted code of conduct that is so precious and is adored by the local people. Violation may be through talking or even actions. For instance, the tradition of not getting drunk in public, wearing short clothes, men piercing, and wearing earrings are some of the unaccepted behaviors that may weaken the ancient beliefs of the locals.

Most of the jobs related to Tourism are not permanent; despite the high availability of jobs during the peak seasons, the employee witnesses significant downfall during off-peak seasons. Most jobs are not reliable, and therefore most people remain jobless for months waiting for the peak season. Seasonal jobs include tour guides selling traditional fabrics, among others. When looking for a job, a job associated with tourism goes for permanent jobs such as hospitality. Besides, most of these jobs do not have pension and insurance, which pauses so much insecurity to the employees in case of an accident during their work. This is because of the unpredictability of such jobs due to the lack of a set customer base.

Tourism generates so much income for Ghana, and sometimes the government may not focus on the regions that do not have tourist attractions sites. The locals need good infrastructure for their own use, but the government is to be concentrating on developing the regions with only attraction sites. The resources that should be allocated to developing such areas are redirected to where it is not needed that much, resulting in so much difference between rich and poor regions. In most countries, tourists’ hotspots are overdeveloped while other regions are neglected.

Most of the tourism disadvantages are not easily noticeable, and therefore they may not be solved. Most issues can be solved to limit their negative impact on the country. It is so easy to assume the disadvantages, but the best way to notice these effects is by looking at the bigger picture of tourism from all angles.

The Most Amazing Things to Do in Ghana with Kids

The Key Requirements to Travel to Ghana