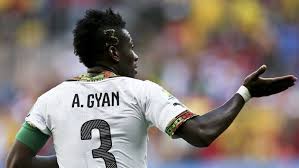 The ex-Black stars captain, Asamoah Gyan, was very happy when one of his fans stopped him on the motorway and awarded him $ 100. The fan said that this was a way of appreciating the Legon Cities Star. Asamoah Gyan is known for donating to individuals, nevertheless, the fan told him that it was his turn to receive a gift.

The Former Black stars captain went to his social media platform to share his joy. He was very happy with what the fan did to him when they met in traffic.

His post read as follows “A fan met me on the motorway today and told me that I always give. He also told me that he had a token from his heart. I’m so touched. I’m going to keep money in my wallet. This is a real die-hard fan. I will never forget the day. God bless him so much.”

Kofi Kinaata says that Christmas celebrations are no longer enjoyable.