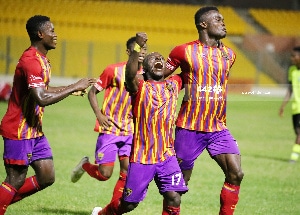 On 16th December 2020, Aduana Stars were playing against Accra Hearts of Oak at the Agyemang Badu Park in Dormaa. Despite the President’s Advisor on health-giving a condition on how football games will be handled after they resume, hundreds of fans gathered to watch and cheer their team. Besides, the fans were not observing covid-19 protocols such as keeping social distance. They were cheering at their home side which emerged victorious by 2 goals.

In regard to the how games were going to be played the government issued GHC900,000 to support eighteen teams plan them. Besides, the government has been criticized for denying fans from attending the games yet they were gathering big rallies before the December 7 elections.

Youth and sports ministry together with the National Sports Authority gave a warning to all fans to watch the games from home because of the Covid-19 rules. For the few games that have already been played so far, the covid-19 guidelines were not observed.

Speaking during an interview the President’s advisor said “We are trying to protect the lives of people here. There is no agenda against any group of people. We told the Ghana Football Association to hold onto the fans attendance at the Ghana premier League goes on to understudy the spread of the virus.”

Am okay marrying someone who has another wife-Actress Salma