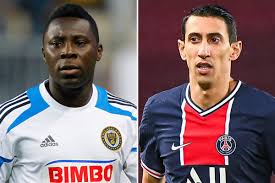 Freddy Adu has disclosed that he was a better footballer compared to Angel Di Maria during their contract with the Portuguese club SL Benfica. Both Adu and Di Maria began playing for the team back in 2007. Di Maria used to play for Rosario Central before joining this team.

At 17 years old, Adu showed the world his great potential to the extent of being compared to Pele from Brazil. He is currently 31 years old but he can no longer fulfill the great potential that he exhibited.
According to this Ghanaian, he made a costly mistake in his development. Speaking during an interview, Adu said “The biggest mistake I made in my career was being loaned by Benfica to Monaco. If I could have reversed the decision, I would not have accepted the loan.”

“I had gone through three coaches in a year at Benfica. There was so much Confusion at that club that I think I just wanted to get out of there and go to another team as soon as possible.

He concluded by saying “I came to Benfica at the same time as Di Maria. In the same year, I was better than him, but I decided to go on a loan and Di Maria stayed at Benfica. He became a starter and one or two years later he went to real Madrid, while I continued going from loan to loan.”