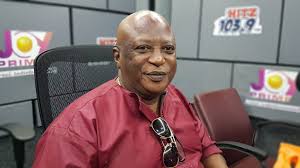 Legendary artiste Nana Tuffour has died. The legend is said to have died today at the Okomfo Anokye Teaching Hospital after a short illness. Nana Tuffour was born on 13th March 1954. In his musical career, he worked with the Wanto Wazuri Band before moving to Waza Afrixo Band where he was the lead artist.

He was widely known for his popular tracks ‘Odo Kakra Sika Kakra and ‘Abeiku’. He was worked with many artists releasing a record of 12 albums.