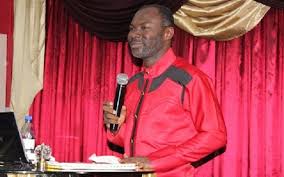 Prophet Badu Kobi, the founder, and leader of Glorious Wave Church International has denied his prophecy on the American Elections. like some bloggers in the country are making it look like.

A video of Prophet Badu Kobi prophesying about the 2020 United States of America elections is going around the social media platforms. In this video, he confidently stated that Donald J Trump will serve for another term. He insisted that during this year’s elections Trump will defeat his contender Joe Biden, regardless of what the Americans will do.

Nevertheless, the Prophet in a statement on his Facebook page has denied ever speaking on the American election.
“I have not reacted to the US elections as bloggers are misleading the public by taking my previous post out of context. “Can God change his mind”. Concerning the American elections, I will talk about it in my church service tomorrow. Bless you, all.”