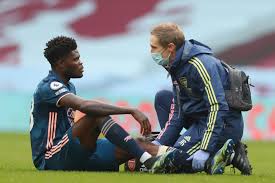 Thomas Partey sustained another injury during Arsenal’s 1-0 defeat against Aston villa. The Ghanaian midfielder was replaced with Willian in the 74th minute. From the time he joined the team, he has been getting injuries while playing. Arsenal has not yet disclosed the extent of the fresh injury.

Thomas spend 5 weeks while receiving treatment after suffering a hip injury in the defeat against Tottenham. So far, he has registered one assist in eleven Premier League games. Arsenal was looking forward to emerge victorious during yesterday’s game after being defeated by the wolves in the midweek.