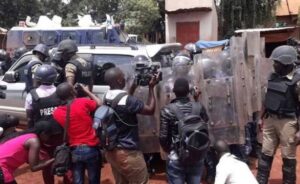 In Uganda, police have begun investigating their violent crackdown on the people protesting last week. Several people lost their lives during the crackdown. Fred Enanga, the police spokesperson said the investigation is meant to “identify mistakes” that resulted in the collateral damage.”

During the protest over the arrest of Robert Kyagulanyi last week, Operatives who had no uniforms were recorded by locals carrying guns in the streets. Robert who is a presidential candidate is commonly known as Bobi Wine. He was arrested because of violating the covid-19 rule and granted bail. Nevertheless, he has gone back to the campaign.

The security Minister General Elly Tumwiine clarified to the media on Friday that in case the protesters “reach a certain level of violence” the police and other security forces have the right of shooting and kill. The European Union envoys have requested a thorough investigation to make sure that the victims get justice.

Stock Market gets better on the back of Standard Chartered