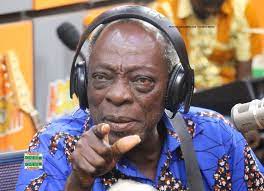 Ghanaian actor Kofi Laing commonly known as Kohwe, has died at 75 years. He died at his home in Accra on Thursday, September 16, 2021. Reports indicate the actor has been suffering from a stroke, and recently his photos of him in unstable conditions went viral. The great actor was well-known for his role in the Ghanaian colonial concept “District Colonial Court” and motivated the upcoming actors in Ghana. In 2019, while speaking to his audience, the comic actor said, “Don’t wait for me to die before you pay glowing tribute to me for my wonderful contribution; your tribute will be meaningless because it will not bring me back to life.” He further revealed that the film enterprise used not pay well during their times. “I cannot even boast about a car tyre despite my many years of service with the Foreign Affairs Ministry as well as the film industry,” he disclosed.

The late actor urged the Ghanaian leaders to consider the aged actors who significantly contributed to the film industry because their efforts and positive impacts can’t be measured. Kofi Laing said that most of his fellow actors died poor because nobody was assisting them.