Bobi Wine from Uganda has suspended his campaigns after chaos 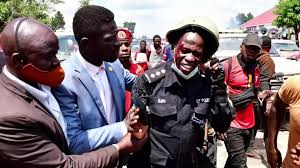 Ugandan presidential candidate Robert Kyagulanyi, commonly known as Bobi Wine, has suspended his campaigns because some members of his campaign group were injured and his car was also damaged. Speaking on Tuesday, the opposition candidate revealed that bullets were fired at his car, hence the tyres got a puncture and the car became immobile.

Furthermore, he said that a few members of his staff got some injuries and that others were in critical condition. During a protest 14 ago, for Bobi to be released from the police 54 people died. The supporter wanted Bobi Wines to be set free after his arrest at a campaign rally. Later, he was granted bail and charged for violating Covid-19 rule and regulations by gathering crowds.

In a national address on Sunday, President Yoweri Museveni defended what the police and army did during the protest, claiming that every politician can be charged for breaking the rules. The January Campaigns are continuing.

President Yoweri Museveni has ruled Uganda since 1986 and the opposition to his government all over the country is increasing very fast. The security forces always act as an obstacle to the Opposition politician’s rallies.

NPP claims that it’s not involved in the arrest of NDC’s parliamentary candidate in Tema East.