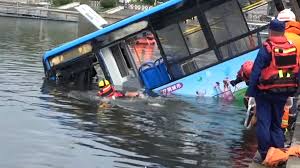 Twenty-one people including the driver of a long-distance bus died with 15 others injured after the bus driver deliberately caused the accident protesting the demolition of his rented house. Onboard, the bus was 12 students who were about to start their college exams. The accident happened in China in the city of Anshun.

On the fateful day, he bought alcohol and drank it before driving. He then sent a voice message to his girlfriend expressing disappointment.