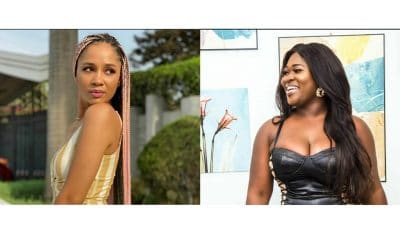 The beef between Efia Odo and Sista Afia is not likely to end soon. Efia Odo restarted it all by dragging Afia’s name into a tweet that had nothing to do with her. It all started when a Twitter user @AbeikuSatntana told Efia Odo that she was shy when she came to Ghana but tried very hard to be heard. In response, the socialite told the twitter user that she was confident and maybe it’s @sista_afia who was not confident.

This led to a series of tweets from Sista Afia. In her first tweet: “Girl !! Keep my name out and keep the trophy”.

Efia replied angrily to the singer. “Why you always getting pressed? Always angry? Why ?”

Sista Afia replied that she was not angry and if she was the socialite would not like it at all. “You called me out in your tweet and now am pressed and angry? Cmon now! If it had being you it’s would have being a whole different scenario! DONT play those games with me!”

Efia Odo replied again telling Afia that she was sad because her latest song ‘Street’ was not trending. “SistA akos, It wasn’t that deep. Like I said I know you’re song ain’t trending so it might have you in a hasty mood but cool down wai.. very soon you go blow. God dey. Make I retweet your pinned tweet give you ?”

The exchange got messy with @efiaodo1 sending an emoji ‘angry hippo’ implying that Afia had a plus body size. She later sends another tweet telling Afia that her conscience was going to judge her.

These two never seem to get over each other. When everyone seems to be quiet, one of them comes up with something to try and irritate the other.