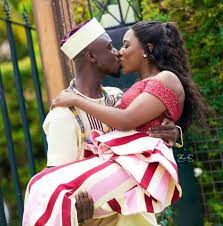 Efia Odo has criticized Victoria Lebene claiming that she is not yet decent despite being married. The beef was initiated from a comment made by Victoria saying that the #FixTheCountry conveners should first change their bad traits. “Don’t say fix and not fix yourself! Change starts with us, the youths. The old folks will leave, and when we hold the fort, we will account for everything we do! COURSE-Means the Direction, Route, Way, the Journey! read, and research things before your comment. THANKS,” Victoria’s comment read.

The socialite said that Victoria’s sins are not covered despite being married. According to Efia, Lebene is a pimp whose ‘whoreness’ has not been canceled because of marriage. While responding to Victoria’s comment Efia wrote, “Lol you’re married now so you think you’re decent? Lmaoo, you forgot when you tried to “hook” me up, and I told you I don’t do hookups? Talking about he will be giving me $2k. Bitch you were selling your pussy and tried to make me sell mine, but not now you are married, so you’re decent.”

Ghanaian celebrities have been termed as hypocrites after failing to attend the #FixTheCountry Campaign.