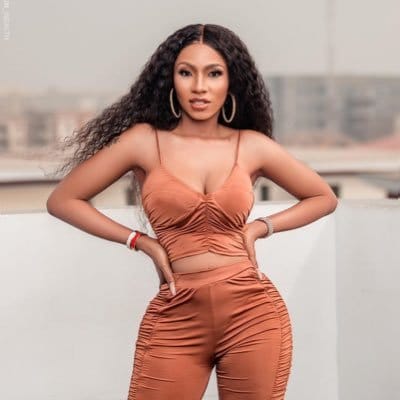 Nigerian celebrity Mercy Eke is in trouble for posting Rudeboy’s Lamborghini. Through her Instagram post, Mercy had captioned ‘a Lambo in A Limbo. Initially, her followers had thought that she had joined the big guys club of Nigerian celebrities who own a ‘Lambo.’

Followers congratulated her on the big achievement but the celebration did not last long. Instagram ‘detectives’ started pinpointing that the Lambo was similar to the one purchased by Rudeboy a few months ago.

The fans then started cropping the two cars side by side to prove the discussion which is currently trending in Nigeria.

During the discussion on her Instagram account @rudeboy  also commented “pls don’t break it”, indicating that it was his car and not hers.

Whether the post was for popularity or social status it did not go as per her expectations. However, she did not bother to explain neither did she remove the Instagram post.

Mercy Eke is an actress, Video vixen and a Nigerian Reality TV Personality born on 19th September 1993 in Nigeria.

She was the first female winner of the Big Brother Africa season four which was held in Lagos Nigeria.

In 2019 she featured in a skit called ‘Broda Shaggi’ which became very popular on YouTube. In business, Mercy has opened her clothesline called MnM luxury. The clothesline which opened its doors on 22nd December 2019 took the market by storm with several celebrities wearing outfits from the store.

Her influence in Nigeria has seen her with the 2019 Celebrity Sensation of the year at the Screams Awards and also the Emerging Celebrity of the Year at the Starzz Awards.