Home News Tyrone Iras Marhguy says that he wishes Achimota School to focus on his brain, not the dreadlocks.
News 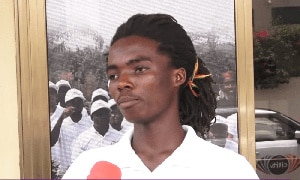 Tyrone Iras has expressed his shock after being denied admission to his dream school because of his dreadlocks. He revealed that he has always wanted to join Achimota school because a good number of great people schooled there.

Speaking during an Interview Tyrone said, “Getting the first choice, Achimota was one of the very schools have always wanted to attend. I was expecting that they will accept me but them thinking of bringing the hair problem and telling me because of your hair you push aside academics and everything and just focus on the dread first. I was shocked and surprised.” He further said that in case Achimota will not accept him, he will consider joining ST John’s where dreadlocks are accepted.

Saa Chick has disclosed that she had sex with a pastor who went to pray for her.